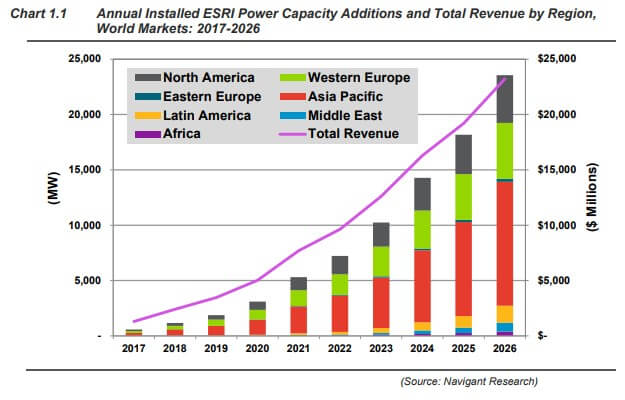 As costs for renewable energy projects drop and policies and resilience demands increase, capacity for wind and solar PV continues to rise across all regions and market segments, according to a new report from Navigant Research. This uptick in large-scale additions of variable forms of generation presents challenges to the electrical grid, but energy storage systems are helping to mitigate concerns and integrate renewable energy resources without affecting grid reliability.

In its report, the research firm examines the global market for energy storage for renewables integration (ESRI), with a focus on six utility-scale, commercial and industrial, and residential applications.

The report says the argument for ESRI relies on several different factors, including the condition of the local grid, the type and amount of renewable generation, and incentives and subsidies, among others. The lack of consistency among regions and even countries within the same region proves to be another barrier to the deployment of energy storage systems, as developers struggle to create standardized systems and financing options that are deployable on a large scale. Additionally, the report says declining costs of renewable generation, especially solar PV, are creating some unique challenges for the energy storage market.

Nonetheless, the report forecasts the total annual revenue for ESRI to exceed $23 billion globally by 2026.

“Thanks to the continued drop in prices in energy storage, solar PV, and wind, ESRI is forecast to see strong growth across both utility-scale and behind-the-meter (BTM) applications,” says Adam Wilson, research analyst with Navigant Research.

Wilson notes, “Interestingly, while utility-scale renewable prices are experiencing bigger declines, formidable drivers in the BTM market, such as peak shaving and incentive programs specific to energy storage, are expected to push the segment to account for roughly two-thirds of forecast global ESRI capacity through 2026.”

According to the report, solar PV has reached grid parity in several locations around the globe and no longer requires policy incentives in order to justify deployment in many markets. Energy storage systems have also experienced steady price decreases over the last five years and are establishing a growing presence in the grid-tied and remote system markets. The report says this has provided customers in both utility-scale and BTM markets greater flexibility in installing economically viable solar-plus-storage systems.

According to the report, several markets such as California, New York, Germany, and Australia are seeing strong deployment of ESRI, thanks to a combination of lower system costs, higher electricity rates and favorable incentives.

Furthermore, the report says Asia Pacific is expected to lead all regions in ESRI deployment through the forecast period, reaching annual installed power capacity of 11,180 MW in 2026. Due to its large markets, along with the combination of developed and undeveloped grids, Asia Pacific is an attractive region for ESRI in multiple different applications.

Navigant Research says it is important to note that remote systems and microgrids are outside the scope of this report and, thus, are not counted in these forecasts.